This plugin is available at Patreon together with all our other goodies. Join me there!

Evouyn is an attempt to make decisions about the low end in both mix and home mastering situations easier. It measure the correlation between frequencies in the spectrum and warn you if the amount of low end exceed what’s known to sound good. This is not a exact knowledge and the situations where Evouyn will give you a warning  even though the amount of low end is perfectly fine are many. Even so, in most music produced today the correlation between parts of the spectrum can be predicted and with the help of little math you can calculate the approximate percentage that most probably sound good.

Evouyn are developed in collaboration between Noisebud and Saintpid Mastering. The idea sprung from the fact that many mixes sent for mastering either lack or have a crazy amount of low end, in most cases because of poor monitoring and/or the lack of proper acoustic treatment (egg boxes will not do). When you try to master something where you have to cut or lower the low end by sometimes up to 7-9dB (the energy doubles every 3dB) you will change the whole feeling of the track and the mastering engineer pretty much have to guess what you’re after. With a balanced mix you’re in for less of a surprise when the track return from the mastering house. 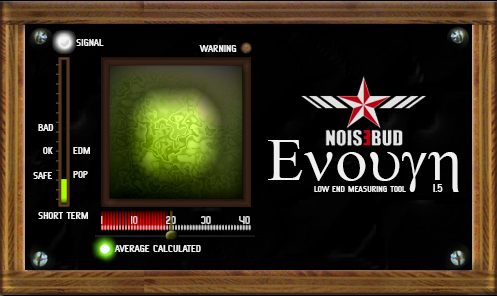 READ THE MANUAL, but if you not that kind’a’gal here’s the quick fix

We hope we haven’t forgot anyone and if we did we’re still grateful even if your name ain’t listed yet!

For Windows 32Bit hosts (or bridged in 64bit hosts)

Number of items in cart: 0

Donate to support our plugin development or music!