Binvert was originally meant to be a plain mix tool to handle phase problems when mixing several channels with bass heavy material. But we realized that what most people liked about the plugin was not the multiband phase shift but the extreme resonance that we added as a bonus to sculpt the sound around the filters cross over frequency. So when we decided to develop Binvert further we began to develop that part of the plugin.  The result is a versatile tool that you can use either as we originally intended, extreme bass drum sounds or for a subtle boost in the low-end while mastering. 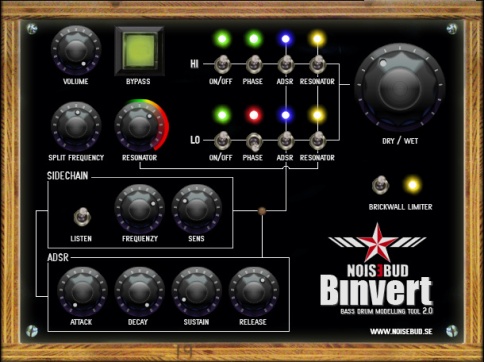 Here’s what it does:

It takes the signal and splits in into two bands (split point is adjustable between 25-440Hz). After the split we put in a phase invert for both bands so you can invert the polarity of the two bands independently from each other. Problem fixed, the bass is still heavy and the mid/high transients stay crisp.
But it is a Noisebud plugin so we couldn’t just make a boring tool, we attached a resonance control to the filter that isn’t really supposed to be there at all but it’s fun, and a limiter & ADSR to tame that Resonator and now it can do wild shit.

For Windows 32Bit hosts (or bridged in 64bit hosts)

This site uses Akismet to reduce spam. Learn how your comment data is processed.

Number of items in cart: 0

Donate to support our plugin development or music!